A rare vintage: capturing the essence of Africa

Instead of writing another nature book, I decided to create a series of poster designs that celebrate the most iconic – and important – wild places in Africa. The great national parks and reserves that still support wildlife communities and into which we can travel to reconnect with nature and witness life as it was before our own species modified so much of the planet. Safeguarding these reservoirs of biodiversity is an obligation that humankind must bear and an imperative for the maintenance of ecological processes upon which all life depends.

In recent years, there has been a resurgence of interest in vintage posters that depict popular travel destinations. Framed reproductions of designs created in the 1950s and 60s have become favoured in home decor, as well as in workspaces, hotels, lodges and public areas. The original posters were produced as promotional or advertising material by airlines, travel agencies and bodies such as the USA wildlife department who commissioned artists to create visually striking designs. Today, many of these reproductions, as well as new renditions, are available from online art print stores. However, African destinations were hardly represented in the 50’s and 60’s, with few of the continent’s spectacular wildlife reserves ever having been depicted in poster form.

It was against this background, that The African Journey Collection of vintage-style poster prints has been created. The best-known parks and reserves have been tackled first: Serengeti, Kruger, Maasai Mara, Etosha, South Luangwa and – of course – the Okavango. My goal was to capture the essence of a place in a single striking image, and I used my own experience of having been in these localities as well as my own sketches, drawings and photographs for reference. Popular tourist destinations such as Cape Town, Victoria Falls and my home town of Hermanus have been included in the initial range of 18 designs. As a long-time fan of ‘The Adventures of Tintin’, created by the Belgian artist and story-teller Hergé, I adopted the ‘ligne claire’ style which is distinguished by flat colours and black outlines. Typography was carefully selected to create a nostalgic feel of a bygone era. The finished designs are ‘vintage-style’ but can also be seen as refreshingly different in an age where photography of wildlife and landscapes prevails.

In some ways, the designs are a culmination of my own life story – a passion for wild places, art and travel. My passion for birds is shown with the inclusion of a bird species in each design, such as these Hartlaub’s Gulls on the Hermanus design. 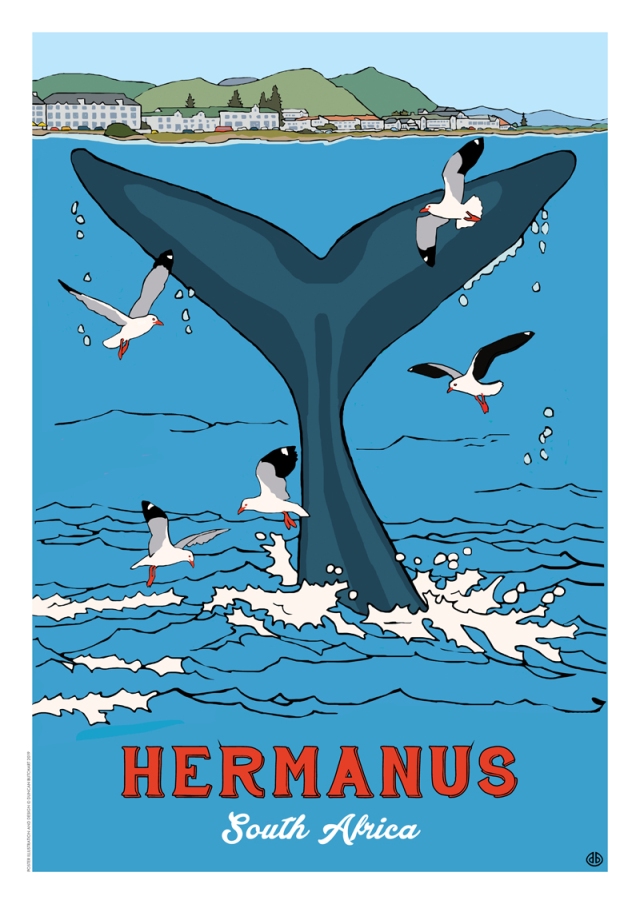 The range is published by Nature Works and an online store is now open. Each ‘poster-print’ is available in three sizes, printed digitally on premium satin photo paper and ’signed by the artist’.  You can explore The African Journey Collection here:  https://dbnatureworks.com/

Living in the cool cloud forests around Machu Picchu in Peru is the Andean Cock-of-the-Rock (Rupicola peruviana), undoubtedly one of the planet’s most remarkable birds. The luminous males perform at a display site (lek) where tan-plumaged females come to select their preferred breeding partner. Digital painting (2019).

Posted on January 1, 2019 by Duncan Butchart 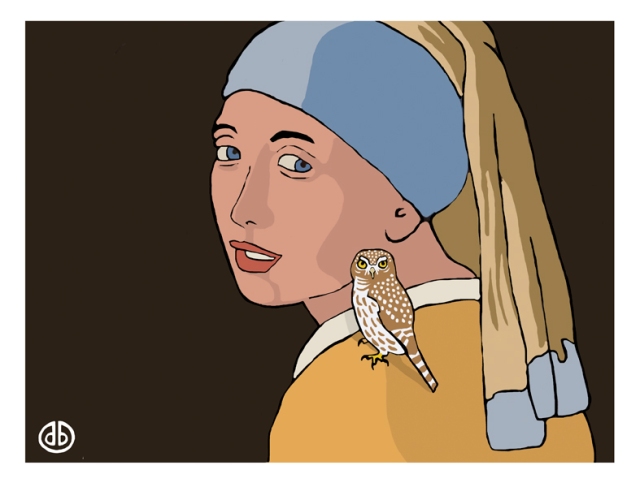 In homage to Dutch master painter Johannes Vermeer’s ‘Girl with a Pearl Earring’ (1665).

My current approach to painting is to simplify detail and render birds in the ‘ligné claire’ style pioneered by Hergé (aka. Georges Remi) the Belgian creator of ‘The Adventures of Tintin’. 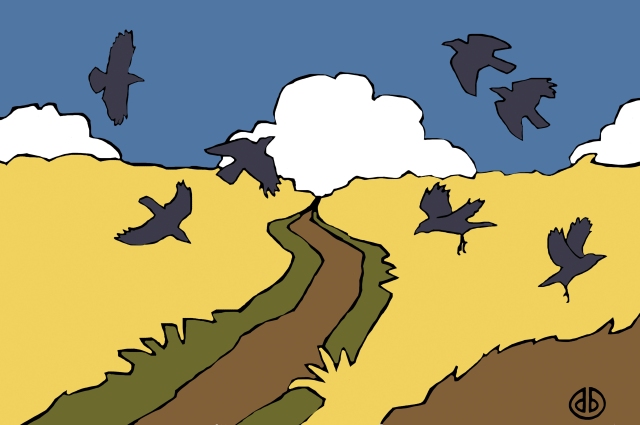 A Tern on the Tide

On a warm and breezy December morning, Jennifer McKenzie of the Hermanus Animal Hospital was walking along the Vermont coastal path when her eye was caught by the wing of a bird lying on the tideline among the pebbles and shells. Closer investigation revealed the sun-bleached corpse of a small tern, with a small aluminium ring attached around one of its tiny legs.

Jennifer contacted me and once I had retrieved the dead bird – and tentatively identified it as a Common Tern (Sterna hirundo) – I was immediately in touch with the South African bird ringing authority (SAFRING) who have an online record submission facility. The data form was duly completed and I awaited feedback on the origin and age of the tern. Since the ring had the words ‘Museum Brussels’ embossed above the number, it had evidently been ringed in that northern European country, but how old was this small migratory bird that had flown a distance of over 10,000 km to reach our shores?

Months passed before I received feedback. Yes, it was Sterna hirundo and had been trapped and ringed (as a first year/immature) in Belgium, at Heist, to be precise. Then, what I had been most interested in, the date of capture: 24 August 2008. Nine years, three months and 14 days before it turned up dead in Hermanus.

Now I got my calculator out, and launched Google Earth on my desktop. Although the distance between Heist and Hermanus is 9,690 km, migratory terns – being coastal seabirds – do not fly in a straight line over the African continent, but must follow the coastline, or perhaps use trade winds further offshore. This means that the journey south is somewhere in the region of 13,000 km and, presuming that these terns return home to breed by the same Atlantic route then they must cover at least 26,000 km each year. If we imagine that this little bird stayed put in Europe for its first year, and only undertook migration as an adult, then it would have completed the return trip eight times, with one final journey south in the European autumn of 2017. Add that up, and you have a distance of 221,000 km . . . a bundle of muscles and feathers weighing about 120 grams travelling a distance equivalent to more than halfway to the moon. Rather incredible.

More amazing, is that this really was still a young bird. The oldest Common Tern listed on the EURING (the European bird ringing association) database was 33 years of age!

Ducks, it has to be said, may not be the most interesting of birds. With a few exceptions they are all rather alike in general body shape and behaviour, generally conforming to the familiar visage of a farmyard duck (this being a descendent of the Mallard).

Not so the truly remarkable Torrent Duck! This extraordinary bird occurs in fast-flowing streams and rivers of South America, where pairs occupy – and vigorously defend – linear territories. As if they were made out of rubber, these ducks throw themselves into the most tumultuous of rapids with wild abandon, bobbing about fearlessly in search of caddis fly larvae and other invertebrate prey. Most food, however, is taken in eddies and vegetated fringes. The pair invariably swim and feed together, hauling themselves up onto slippery boulders where they keep a constant look-out for rivals. If a rival appears, there is much energetic chasing, accompanied by head-bowing and tail-cocking displays.

My first encounter with one of these striking ducks was in Peru on a small mountain stream rushing beneath mossy forest on the fabled Manu Road that snakes its way down the eastern slopes of the Andes, from the altiplano to the Amazon. I’d been walking down the road, following a mixed flock of tanagers and other insectivorous birds, when I came to a small bridge. Perched on the bridge post was a tiny little flycatcher with a dark head – a Torrent Tyrannulet. As this little sprite flitted out across the water, its namesake – a male Torrent Duck – peered up at me briefly, then slid quietly off its boulder perch to disappear beneath the froth and bubbles. It was a fleeting observation, but memorable.

Later, still in Peru, I was to get much better views of these ducks along the spectacular Urubamba River which divides the little tourist town of Aguas Calientas from the former Inca citadel of Machu Picchu. Here I was able to watch fearless Torrent Ducks swimming, feeding and engaged in territorial disputes in the chilly waters that flow from the snow-capped Andean peaks.

Underwater, I suppose these tough little ducks swim much like cormorants, propelling themselves with their webbed feet and with neck outstretched. Interestingly, the stiff tail feathers are evidently used in a similar manner to those of woodpeckers in that they help to provide balance on the smooth boulders. Underwater, the tail is no doubt used as a rudder.

There are six regional subspecies of Torrent Duck (Merganetta armata), with the males being quite different in plumage, but the rufous and grey females being more or less identical. The male of the northernmost subspecies (Venezuela to N.Ecuador – M. a. colombiana) has pale underparts with black streaks, while the male of the southernmost subspecies (the nominate M.a. armata occupies most of Chile and southern Argentina to Tierra del Fuego) has black chest and flanks with a cinnamon underbelly; this is the form in my illustration above.